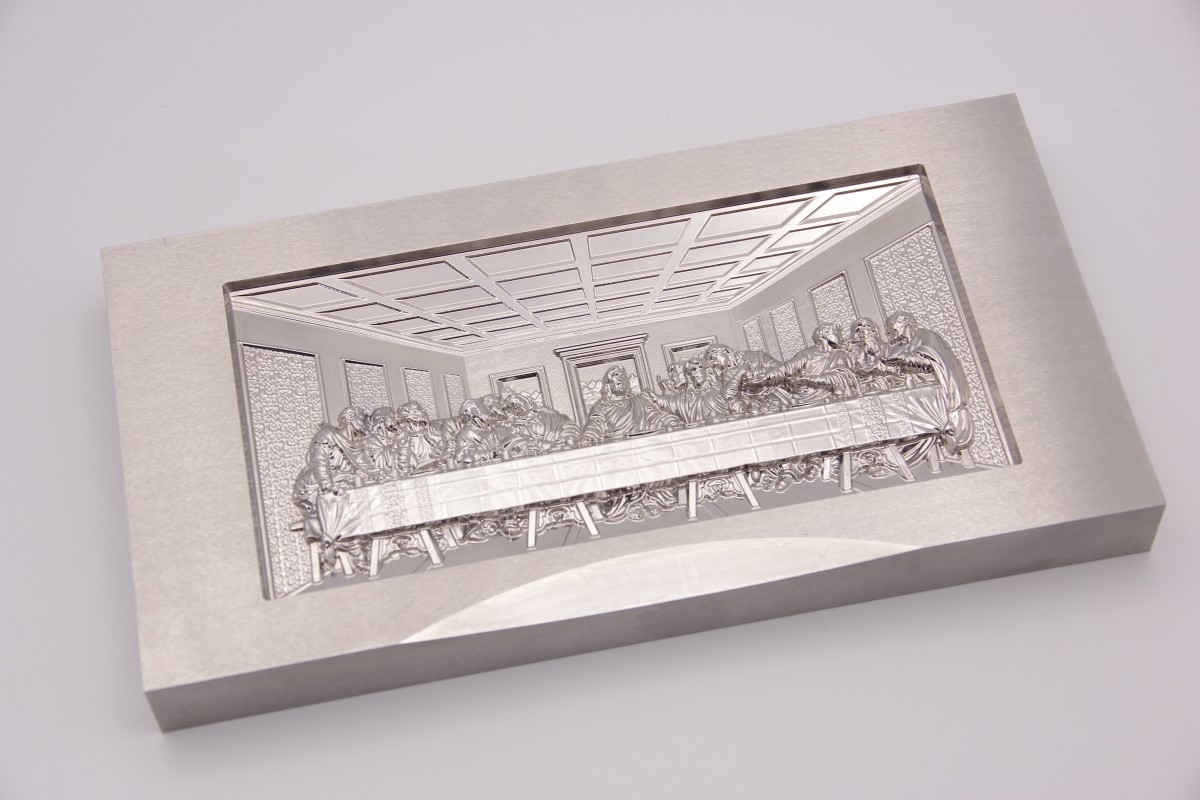 Because of its dramatic composition, Leonardo da Vinci's "The Last Supper" is considered to be one of his masterpieces. By using perspective and portraying the people as if they were alive, the painter gives the viewers a sense of realism.
We asked ourselves: Would it be possible to depict a famous painting by milling? This simple question led to the challenge of milling "The Last Supper". The material used is 1.2083 (52HRC) mold steel with dimensions of 190 x 100 x20mm, and we employed solid carbide coated ball endmills with a minimum diameter of 1.0mm (r 0.5mm) for direct milling. The originally two-dimensional painting has become three-dimensional, with its characteristic perspective now even more pronounced. The wrinkles on the clothes and the relief on the back are expressed in intricate detail, making it possible to enjoy the image of the masterpiece as a sculpture. Noteworthy is the roughness of the finish, which has achieved Ra 80nm, giving it an almost mirror-like surface.

The machine used for this work is the YBM V-series, a CNC JIGBORER well known for its high precision and rigidity with ball screws, box guide ways and BT40 spindles that are widely used in the direct milling of mold bases, die plates and inserts for cold forging dies. The YASDA machine, which is carefully assembled using traditional hand scraping and skilled craftsmanship, achieves a smooth motion similar to a linear motor-driven machine, and a high surface roughness of Ra80nm. This is a phenomenal result for a ball screw drive. The step letters of2μm difference engraved under the painting also prove the machine's micron-level tracking performance.

In addition, the YASDA's unique pre-load self-adjusting spindle enables high-precision machining in the entire rotation range, from rough milling of high-hardness materials from solid to a finish that reaches Ra 80nm, thereby making it possible to accomplish everything from roughing to finishing with a single machine. The machine is equipped with thermal distortion stabilizing system that has evolved over 30years since the first release of the machine. This system minimizes the effects of external temperature changes and heat generated by the machine, ensuring stable accuracy even during long periods of machining of over 60 hours.

YASDA's CNCJIGBORER, YBM V-series, which has been installed more than 3,000 times all over the world, achieves the highest surface quality comparable to that of linear motor machines, and provides a complete solution, capable of everything from the rough process to the finishing process at a high level with a single machine.